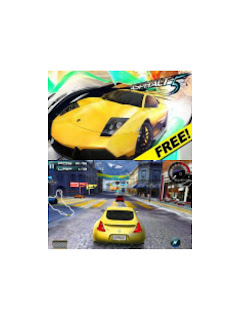 Asphalt 5 HD is probably one of the best looking games for Android available on the Market. It is developer by Gameloft, one of the biggest mobile game developers. You will only be able to play the game on a high-end Android device like Nexus One, HTC Desire, Droids, Galaxy S line and other phone in the same specification bracket. The game is obviously a racing game, but it has a lot of arcade and action aspects. In this game you are able to smash your enemies different ways like in Burnout game for PlayStation. This game is also a great show-off material to show what your phone is capable off.

In this game you will be able to drive exclusive super-cars, and the more races you win and the more opponents you smash, the more expensive your car gets. You start off with a humble Mini Cooper, and later get to drive Ferraris and Lambos. Along with the cars and racetracks you also unlock female companions, whatever is that about, I guess that is what game demographics crave for. You race across different continents in town like Las Vegas, Paris, Rio. There are also more sight-seeing oriented scenes like Aspen. Scenes are quite detailed and look stunning, just like every other part of the game.

The game offers several types of steering controls, tilting your device is by default, which was too responsive for me, and I quickly switched to tapping and liked it a lot. I am not a racing expert but physics in the game didn’t look natural, however smashing your opponent and then seeing him reappear is not something you would see in a real world either, so I guess it is intentional. What I noticed is that you don’t feel the speed with which you move much, maybe it is because I am spoiled with console type racing games, I don’t know.

There are several modes in the game. Career mode offers different events like drag racing, drift contests (which I didn’t like much), elimination event with cops (my favorite), timed racing etc. You get different amounts of cash based on your performance, they are now at your disposal to pimp your ride, or get a new one. When you drive, for various actions like drifting, taking down enemies and collecting nitro bonuses, you get rewarded nitro, which makes you move a little faster but zoom effect makes it look like you are jet-fast. You can race with your friends over Wi-Fi (given they are in the same network and have Asphalt 5 too).

Overall the game looks stunning, this is hands down the best looking game for Android I have ever seen, and it is a good match for the beautiful screen of you high-end Android device. The game is $4.99 but you can try Free version of the game before purchasing, to see if your phone is capable of handling it and if you like the basic gaming.

Caligo Chaser is a hack and slash RPG game by Korean developer [Com2uS] recently ported to Android platform. The game features best graphics I have ever seen on any mobile game of this genre. Controls are what you may expect on the touchscreen device – left thumb contols movement with joystick and right thumb hacks, slashes and uses magic skills. You also have to navigate game menu using your left D-pad and right buttons (big one for OK, small one for BACK) which is something you need to get used to since it is not intuitive for touch screen device, but items in the menu are so small there is no way it would be useful otherwise. In this game you will have a lot of items, weapons and skills to choose from, especially in paid version.

You start off in Emporion town, where you will see various NPCs, a bridge and two exits into wilderness – where you can’t go yet. You will need to do some talking first! Your character is Private Knight, and there is a big story to follow on how you got there and what your agenda is. You will notice that NPCs with exclamation (or question) mark (!,?) above their heads are the ones you should talk to, in order to get the quest, some item or training. Completing quests is what makes you advance through the game. Somewhere in the start your character is approached by some jealous girl who wants to marry him or something, I’m sure it’s pretty amusing if you follow the story, but I’m all about the slashin’ & hackin’.

After some talking with banker, who wants his 100,000 Leone (gold coin currency) back, Alex, who seems to be your mentor, and town trainer, you will be able to go out of the city. In the first town, there are two exits, one is to the south and the other all the way on the east side. Don’t make my mistake and go to the latter, mobs there are just too much for you at this point. Proceed to the southern gate.

Map in this game is huge, you will go through several cities, which makes it more RPG than hack’n'slash game because you will spend quite some time in cities looking for some quests and what not.

When you enter combat area you will be approached by creatures from left and right, after cleaning one screen you move on to another. As you move forward the mobs seem to get stronger and stronger. When you clear the whole stage you have 30 seconds to pick up what’s on the ground (leone,various items) and some bonus stashes fall from the sky for you to hack on. If you get killed you will be resurrected, if you have scroll of resurrection that is. After each major fight you will get ranking which will be stored on paper, for your later reference I guess.

After a few quests, you will get skill stone which gets you special skill in the combat. There are plenty of various skills in the game, so you become some sort of wizard if you chose to allocate skill points to spirit and intellect. Each level-up you get to spend 5 points on your masteries such as strength, dexterity, luck, stamina, spirit, or intellect – which is pretty basic for every RPG game.