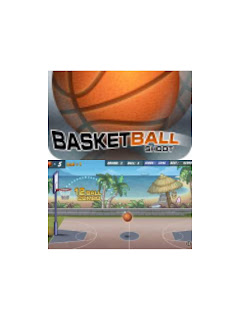 Basketball Shot [by DroidHen]… Guess what this game is about? Well, not really basketball, but close! Basketball Shot was actually inspired by real-life street basketball arcade machines, an emulator if you will. I don’t really like basketball, so I hesitated a bit before downloading the lite version, but once I started playing my attitude towards this game flipped 180 degrees. I’m more of a BASEketball type of person, so a game where I just have to throw stuff into the basket (like Paper Toss) is definitely something I can enjoy.

There is a point target set at the beginning of each level and your job is to get as many points as needed to advance to the next level. There are 4 balls at your disposal, which can be thrown into the basket by flicking your finger. It’ll take a couple of minutes for you to adjust your aim and speed, but it’s not that difficult to do. It IS difficult to do it many times in a row, especially when the basket starts moving from left to right.

In the first level you’re given the most time, the score target is the lowest, the basket doesn’t move and the first ball is even thrown into the basket for you. Maybe it just shows you what you have to do or perhaps the developers didn’t want you to feel like a total loser and just gave you the first 2 points for free. Use the first level to get as much points as possible, because the score target will get higher with each level and you’ll have less time to reach it.

The physics of this game a pretty good, since the balls bounce around realistically and even circle the basket like a real ball would. The graphics and animation are pretty good as well, haven’t noticed any lag during the game so far. I really like the sounds, they definitely enhance the overall experience of the game. However, they guy who yells “Great shot!” every time you make a 3 point shot can get annoying at times.

The menu is easy to navigate, but looks worse than the actual game, especially the font is way too simple for my taste. A cute, nicely-drawn cheerleader congratulates you after each level, but does this rather unenthusiastically. Can’t blame her for that since she probably has some kind of elbow paralysis and isn’t able to bend her arms. You can compete with players around the world using the online ranking system, which is always great. The full version is ad free and the developers claim it to be even faster. You can go pro by purchasing a shared license using the in-game menu, which can also be used to get rid of the ads in the sequel – Basketball Shot II. I definitely recommend downloading this game even if you don’t like basketball and just enjoy tossing games.

Apparently this is the most beautiful app I’ve ever seen, at least the one of a zodiac and horoscope kind.

Honestly, I don’t give a shit about those weird moon calendars, zodiac signs, astrology and other gypsy/girly stuff, but this application is SO amazing, I couldn’t resist and looked through everything there just because it was so gorgeous. When something is done with such grace and passion, and skill in art or design, you really are stunned on the spot — Bam! — regardless of a theme of this particular thing.

I mean, all this information accumulated there about signs and moon phases is not very useful in life of any normal person, but when you allowed to touch almost every part of the screen and know that there will be detailed and awesomely fashioned page, you just go there and read it no matter what, peeking through little pictures and sliding back and forth the hi-res moon.

And if by strange circumstances you are a some kind of a moon fan (or a gypsy?), this is the ultimate point in the life of your handheld device, which would be stuck then with this epic app forever. Or maybe not, because it’s expensive and not half of the gypsies have six spare bucks.