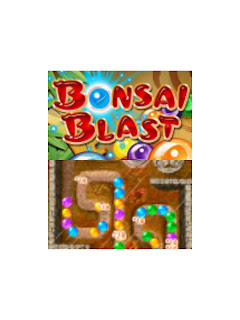 Bonsai Blast [by Glu Mobile] is a puzzle shooter game.  When I started playing, it instantly reminded me of Heavenly Sword. Yes, they are very different games, but both of them can be described by just one word – beautiful. Bonsai blast is yet another group the colored balls game, however, it’s the most original game of the genre.

There is so much stuff going on in this game it could be a proper game for PS3 or that other console… You have an old arrow shaped cannon that shoots marbles of different colors. A heavy rock is pushing down a bunch of different colored marbles down a road. You have to prevent the marbles from falling into a hole with a spinning Yin-Yang sing on the top, by shooting the properly colored marble into at least 2 marbles of the same color. When they disappear you get points and/or power ups (sometimes even power-downs in a form of a black cloud that makes your cannon not function properly).

The cannon can teleport from one platform to another to get a better vantage point. Power-ups come in a form of the elements;  wind (makes the marbles go back where they came from), rain (washes away some of the marbles) and in the form of fire balls which destroy any marble, light balls which destroy a few marbles but in a beautiful sparkly way, and earth balls, which destroy all marbles of the same color.

All levels are available in the free version of the game. The levels are grouped into chapters that have the most Zen names – “Morning”, “Afternoon” and “Evening”. Some levels are similar in terms of the kind of maze that is used, but they are different in terms of design.

Bonsai blast has simple, but incredibly beautiful graphics. You’ll notice right away from the menu that this game is not like any other game. The music, the sounds, the beautiful gardens with magical Sakura flower petals blowing in the wind and just the whole concept of the game is amazing, beautiful and harmonic. I think they had a Feng Shui professional on the team, because this game just radiates perfect balance.

Smooth gameplay and animations, along with the beautiful Chinese ink art inspired graphics makes Bonsai blast one of my all time favorite android games. I absolutely recommend downloading the free version or even buying the full add-free game right away. At under $1 it can be considered a gift from the developers, not a purchase.

Everlands, a turn-based game based on strategy, involves the command of a group of “good” animals versus a group of “evil” animals. There are, however, ways to convert evil animals to good, and vice-versa. Each animal unit has a unique health statistic, damage/strength statistic, and a specific attack capability in surrounding hex spaces.

Every animal has their unique abilities. Your aim is to control over half of the board after the game is done. Everlands has clear directions and a good tutorial mode so you can learn to play fast which is unusual for an Android game. A hexagonal tile grid is used for the game’s graphics (with a unique design for each scene) plus the audio has corresponding sounds based on the selection and the introduction music has a good, relaxing tune.

Controls are entirely touch-based. The player selects an animal tile from a pool of available tiles seen at the bottom of the screen, and selects the place to move the tile. Mistakes are easily fixed, because no move is made until the “make my move” button in the upper right corner is tapped. The game continually gives advice when the star icon is tapped. The advice function is fairly intelligent but does allow players to win “too easily”.

The game is actually a story mode that has 20 missions of moderate difficulty. There’s also a two-player match mode. There are extra scenarios. You can play with different maps, against different levels of AI. This is probably the only drawback of this well put together game: upon finishing the story mode you can do one of two things – find an opponent to play you in hot seat mode or exit the game. In my opinion online play would make this game much more attractive. Get Everlands for your phone or Everlands HD for your tablet.