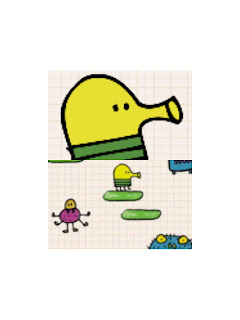 This game was originally designed for the iPhone, and now is as many other games ported to Android platform. In Doodle Jump, you control your creature with vuvuzela-like nose (Doodle the Doodler) trying to jump as high as possible relying on random platforms. Along the way, you will catch many different bonus items that will get you boosted. There are propeller hats, jetpacks, rockets and various springs to help you accelerate for a moment. You also have enemies – monsters that you can eliminate by shooting out of creature’s weird nose; to shoot you just have to tap the screen and Doodler will shoot an enemy based on direction of your finger.

Game is basically infinite – that is if you are not sucked into a black hole, fall on the ground, jump into monster, or get abducted by aliens. Game has many different obstacles that don’t want you to get as high as you do, so you should avoid them. To help you with that there are many different power ups. Platforms also vary in their color and quality; some are single-use platforms (break when you jump on them), and some are constantly moving.

The game is very addictive – you can spend hours playing it. You can post your cores on Twitter or Facebook and challenge your friends to beat them.

Dragon and Dracula [by HeroCraft] is a fun and challenging arcade android game that is sure to touch the hearts of the Mario and Spyro the Dragon generation. It takes the jumping, coin collecting and shrooms – the inspiration for many 90’s games – from Mario, giving the role of the hero to an increasingly awesome dragon, whose job is to defeat Dracula.

The fact that you start the game with just a little baby dragon that jumps can be disappointing, at first. However, as you progress through the 25 levels of the game, learning new skills, collecting artifacts and battling enemies, you will see the little guy go through three stages of evolution. With every new form the dragon grows, acquiring fire breathing, flying, climbing and head bashing abilities, not to mention a mean look.

The dragon’s natural abilities are enhanced with the always popular temporary perks such as invulnerability, increased speed, regeneration and many more. They will be of great help on the quest to destroy the Dark Lord’s minions and defeat the legendary vampire that is Dracula. Gamers who find the adventure to be unfulfilling can enjoy some mini games that are unlocked during gameplay.

Controls might take a couple of deaths to get used to and actually made me play with my tongue out, which I have not done in a while. The menu is very well thought through, easy to navigate and has all the information on game controls, settings, stats and sharing options. Thanks to the simple yet visually pleasing and familiar graphics, the gameplay is smooth. Not a fan of the soundtrack though, which sounds like old Japanese game techno music. For only $1 Dragon and Dracula has a lot to offer with tricky levels, epic boss fights, addictive mini games and main character customizations. If you are just looking for a fun adventure or want to prove yourself on a global scale, this is the bargain to go for.