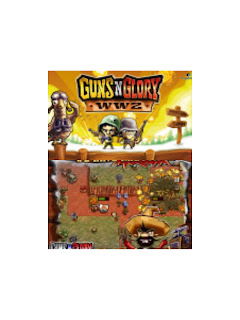 Guns’n'Glory [by HandyGames] is a tower-defense like game, except that instead of towers you recruit cowboys, bandits, gringos and Indians to ambush settlers with you. So your journey begins with the map, which you will conquer, and many more others too.The game is simply a little revamped tower-defense style game, but it’s worth noticing that your recruits can walk around and pursue their target, unlike in most tower games, where you would need to demolish tower and build another one instead. Game controls are quite simple, nothing new here. To hire new bandit you simply wake sleeping one, and he will help you kill some settlers – with his gun or a pack of dynamite – depends on how much you pay.

You can select your units to see their range, and drag them to desired position, preferable where they will take full advantage of their range.

This game is quite well executed, featuring nice cartoon graphics and easy controls, as well as some sort of “story” behind game, and makes more sense to wake up a bandit and offer him money to fight for you rather that summon tower out of nothing.

Movable towers bring much more action to the game as expected, on some levels you just have to move them around to kill all settlers, because they are spawned from different locations simultaneously and you won’t be able to hurt them all without smart strategy. This bring more action and excitement to the game, rather than just watching as your towers wipe off helpless peasants.

EVAC HD is a higher resolution android game of EVAC, meaning it looks better higher-resolution devices like HTC Desire, Droid, Droid 2 etc. EVAC is very similar to the way Pac-Man is played with some upgrades. You navigate Pinky, the little pink block, and try to get through the maze eating all the light-balls along your way. When the last one is eaten, a door opens that lets you out of the maze. This would be too easy, of course, so you are always being chased by evil little red-boxes send by their master Shadow Box.

As you run around the map crazily, trying to avoid the red blocks, you will run into different tools you can use, most of them being power-ups. While I was playing I discovered Shocks (stuns), Ghost (which makes you invisible for awhile), and Aura (which can kill enemies). You might also meet a yellow block that will push you around. If you are good enough, you can kill the red blocks with the yellow blocks but their main goal is to cause switches on the map.

A tiny d-pad is used to control EVAC, and I have found it difficult to use. Overall, I think that it is way too small, and it has inhibited my game play. Even in the middle of the most exciting chases, it doesn’t seem like you have much control. If you hold our finger right on the pad for just a bit, it will unlock and you can move the cursor elsewhere. I really found this feature useless, and because the Home button is to the right of the screen, I kept bumping it and accidentally closing the game.

Overall, I feel that the game’s controls need a little improvement, but then again, I really don’t like on-screen D-pad. While the EVAC application has excited many Android users by introducing a Pac-Man type arcade game which uses sharp up-to-date graphics and is sold at an acceptable price, the game clearly needs improvement in controls, optimization and additional levels.

No comments for "Guns’N’Glory Android Games"