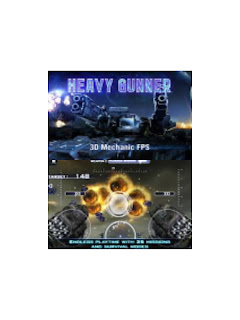 Heavy Gunner 3D [by Com2uS] is one of the most popular games for android and it deserves to be. Not only will it put your skills to the test, it will also put your phone’s tech specs to the test. Is this awesome looking game with a killer name worth the 4.99$ I paid for it? If you’re in a hurry and willing to take my word for it then the short answer is yes. But if you feel like you can’t yet trust me and have a few minutes to spare, then this review is for you.

Before buying a game we usually try to decide if it’s good enough. With Heavy Gunner 3D you should be asking yourself a different question “Is my phone good enough for this game?”. The graphics are great compared to other games on android. Everything moves, flashes, makes sounds, vibrates and drains your battery. If you have one the more powerful android phones, you can fully enjoy this game. However, if you’re like me and have one of the earlier android phones, you might have to make some adjustments in the settings to ensure that the game runs smoothly.

How to Play Heavy Gunner 3D

Do you hate those people that talk smack about video games, saying they make you dumb and violent and what not, when we all know they actually help develop your brain in various ways? Well, I certainly do and I just became more dangerous for those people to mess with me because now I’m better at tracking multiple targets and firing 2 guns at the same time, all thanks to Heavy Gunner. You’ll be tilting your phone and working it with your thumbs like it was a PS3 controller, while trying to keep up track of the enemies on the screen.

This game uses the same formula as many movies and games like Resident evil, Devil May Cry, Hitman, Max Payne, etc. I call it the double gun formula: a gun multiplied by another gun equals four times the coolness. It’s a joke, but it’s also true, I mean who’s cooler a guy with a gun or a guy with 2 guns? Exactly, now you get to be that guy or girl (which also makes you hotter) with 2 guns. When I’m firing those two machine guns, I feel like one of the guys from The Matrix Revolutions in the fight for Zion and it feels awesome. You can select from a variety of very nicely drawn guns that are very different from each other in style, specs and way of firing.

There are a few types of enemies and even a couple of bosses in this game, but they do get repetitive. You will get annoyed by the way they just circle you and attack you from different sides, but hey, that’s why they call it 3D. Don’t worry and don’t take your anger out on your phone, because once you get a hang of the controls, it will become fun. The levels are your typical futuristic space war type and don’t really look cool, just OK. There’s a story if you’re into that, but personally I haven’t read a word of it because I was having too much fun with the weapons.

The menu has everything you need and is properly animated. You’ll be definitely visiting the settings a few times. The first thing I did was reverse the Y-Axis. This allowed me to look up by tilting the upper side of my phone up and look down by tilting the upper side of my phone down. The default setting is the other way around. I see that in many PC games and it’s something I never understood. Who finds it more comfortable to press the down button to look up and the up button to look down? It defies all logic and never made sense to me, but for some reason it’s usually the default option in games. If the game is a bit laggy on your phone, just go to settings and switch the Priority from Quality to Speed. You’ll lose a bit of the graphics but will be able to play the game properly.

Heavy Gunner 3D may need to get polished a bit to be perfect, but all in all it’s a great game which is tons of fun and definitely worth the money. It’s also a great example of what a proper game on android should be like.