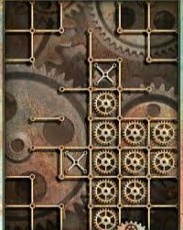 Iron Dots Online is an adaptation of classic Dots and Boxes paper and pencil game. There are already Dots games in Android Marketplace, but this one has an interesting twist, it’s Online so you can actually put your dots and boxes logic skills to test. So far the only way to play this game online was to share a device and play on one screen with the person near you, this game allows you to connect with some random person who is willing to play Iron Dots Online at the same time as you on their android device, much like Cestos 2. You can also practice this game while playing with the AI, which is located somewhere in the cloud so you will be connected to the internet.

Rules of the Dot game are quite easy, you have to place vertical or horizontal lines turn by turn: you, then your enemy. The player who”closes” the box by placing final line reserves the box with his element, thus getting a score. Usually the game sports a clean field, but in this android game it looks like it is generated semi-randomly and you have some sort of pattern on the field, making the map as unpredictable as it gets in this game. If you are not familiar with the classic Boxes & Squares game, just check out Tutorial in the menu which will be quite handy for you.

At the start, players usually place lines in random places in random order, but since real estate on the map becomes scarce, you should then think a few steps ahead, and when capturing of boxes begins, you have to think not to let your enemy get a box that will put him on a roll (chain), resulting in him covering most of the map and you – loosing. Sometime you may want to skip closing a box where you have an opportunity, since later you will be only left with choices that will let your opponent cover big chunks of the map. More experienced players just wait for the right moment to snatch the biggest chain and win only based on one successful move.

Graphics in this Android game are quite basic, good for a free games but not a match to most paid games, I hope future updates bring more variety in graphics and map sizes. Game has leader-boards powered by OpenFeint and a system of achievements. If you used to play this game with paper and pencil as a kid in school or somewhere else, you can refresh your strategy on a handy Wikipedia page of this game.

Scan or click to get Iron Dots Online game for Android. Free!

As you already know from the previous paragraph the aim of this game is to group balls by color so that they pop and you get points. The game offers so many ways of doing this that it never gets old. The little variations of the game are broken into two categories; arcade and logical. If you choose the arcade mode, you’ll have to deal with the clock that doesn’t allow you to sit around and think about your next move, but forces you to make instant decisions. The logical mode has no time limit, so you can plan your next move carefully in order to get the maximum amount of points and be able to advance to the next level. I like to play the arcade mode because it is more extreme (as far as extreme puzzles go) and that makes it more fun.

The game is full of little animations like the floating bubbles in the background of the menu, the dissolving points that appear for a short while after you’ve popped a few balls and so on. All these little details make the game very enjoyable. The music and the changing background colors are so relaxing that if I was a girl I would take a bubble bath with candles and play this game.

Something I haven’t seen before in this type of games is the option to change the gravity, meaning that if you want the balls to fall in a different direction at any point during gameplay, you just flip your phone and play in landscape mode. This is cool, but too advanced for me.

You can create a Scoreloop profile that will not only enable you to submit your score to online highscores but also give you the ability to add friends. Beautiful graphics, great sounds, nice little animations, many ways of playing the game and many other well thought out details make JellyBalls a flawless puzzle game absolutely worth more than the £0.99 (~$1.56) you can get it for on the Android Market.