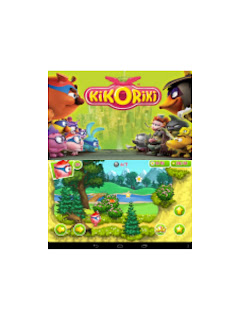 Kikoriki: The Beginning [by HeroCraft] is yet another arcade adventure android game from the people that brought you Dragon and Dracula. The game is based on the Russian cartoon series “Smeshariki”, but the show is known by different names in other countries.

The characters of the animated series become superheroes in this adventure, which is always fun for kids and adults. Children will probably enjoy it more than adults due to the excruciatingly child friendly atmosphere of the game. However, some grown-ups might give it a go just to try out the various super powers each hero possesses.

Your mission is to vanquish evil and thus save the boring grown up world from destruction. How does one do that? Well, by working together of course, just like best friends should! The power of friendship is demonstrated in the game by allowing the player to switch between two characters during gameplay and use their individual super powers to solve puzzles, defeat bosses and do anything to complete the level.

The three chapters of the story take you from the happy land of Kikoriki to the boring grey Megapolis. Each chapter tells a different story and allows you to play various characters. The game has brightly colored, simple and yet well drawn cartoon style graphics with smooth animation. The controls might take a bit of getting used to, the joystick in particular. I do like the soundtrack, which reminded me of the music from good old cartoons like Tom & Jerry. Kikoriki will only set you back $1, unless you don’t really love your children that much, in which case you can opt for the lite version. Either way, the game will help keep your kids preoccupied and will not only help them learn about friendship and growing up, but will also teach them that if you touch purple butterflies it will make you sneeze stars.

Mega Jump [by Get Set Games] is a title ported to Android platform straight from iOS. At the time of writing this review, it is not yet available in Android Market, but OpenFeint announced that it is working on bringing it to the open source platform by the end of the month. This is yet another jumping arcade game, but it is somewhat unique, you are not jumping on platforms like in some other jumping games, but rather you are in continuous jump and you gain boots from collecting gold coins and other items that boots you even further.

The game amazed me by its smoothness and graphics, it is by far the best jump game I played on a mobile device (no offence doodle jump). The overall execution of this game gets it spot at the top of jumping games. There are different power-ups in this game that will affect your soaring, they make you faster, give you higher jumps when you get coins, and some even slow down the rate at which you fall. Oh, and you control you control your orange baby dinosaur by tilting your device – what a surprise. With OpenFeint enabled you will be able to compete with people all around the world to get highest highscore by soaring high and collecting most coins possible. I suppose you will be able to compete not only with Android devices but with iPhone and iPad users too.

NB! Remember that at the time of this review the game is not yet in Android Marketplace, so price details I give are just guesses.

Penguin [by MTM HZSTUDIO] is an android adaption of the original flash game by Chris Hilgert of yetisports.org, called Pingu Throw. Only instead of a yeti (who looks a bit like Captain Caveman) hitting a penguin with a club, it’s a polar bear hitting a penguin with a baseball bat. It’s just as simple, fun and addictive as the original. Who knew that suicidal penguins in combination with a maniacal bear with a cute and at the same time evil face, would be so entertaining?

The aim is to get the highest score possible. This is achieved by hitting the penguin at just the right time. If you hit it too early, you’ll send the poor thing so high into the air, he’ll have enough time to figure out why exactly penguins don’t fly. If you hit it too late, the penguin will bounce like a skipping rock, but won’t go that far. My record is 25 306 points, which isn’t that bad since the world record is 29 154. Judging by the way the penguin bounces at the end I don’t think you can go over 30K.

I like the drawing style and the sounds are fun in a cartoony type of way, but the graphics could be a bit better and some more stuff in the background wouldn’t hurt. Definitely check it out if you like the original flash game and have a few minutes to kill, or if it any point while reading this review you said to yourself “I can score higher than him”.

No comments for "Kikoriki: The Beginning Review Android Games"