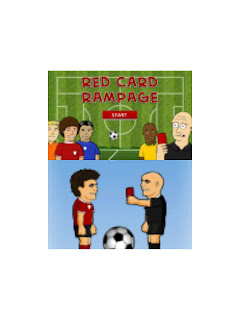 Labyrinth [by Illusion Labs] is an implementation of vintage labyrinth game, and it is very well done, is more playable and enjoyable than hardware original. Game graphics are made to give it real game feel: steel ball, wooden floor, and walls make shadows when you tilt the device – something you need to do as it affects how steel ball moves. Game comes in free (lite) and paid version (~$4.6). Free game has just enough levels to try it – 10, and paid embodies 50 official levels as well as whopping 1000 levels made by community – and you can make your own levels too!

If you are done with all 10 levels, and don’t want to buy the app, try beating my score at level 4, which took me exactly 1.89 seconds to solve

Red Card Rampage is a physics puzzle game based on a popular flash game by the same name. What’s a physics puzzle game? Something like the Worms game on PC, where you have to take the weight of the object, the trajectory, the speed, as well as the wind into account in order to hit your target. I hate soccer, but I enjoy this type of games, so I was unsure if I would like it this one.

The home screen made me like the game right away thanks to the face expressions of the players and the theme song. The three guys on the left look like they’re trying to pick up chicks, the guy behind the referee looks like he’s playing for the “special” team and the referee looks like he’s being held at gunpoint which would explain the scared and nervous look he has. The theme song sounds like it was written for a kid’s show from my childhood and I’m happy to hear it again. There isn’t much of a menu, just a start button, which is fine because you don’t really need a menu for this game because it’s very simple. It would be nice to have the option to turn the sound off, without having to put your phone in silent mode or turning down the sound of Media. Maybe we’ll see that in the next update.

The aim of the game is to hit the referee with a ball and the levels are designed in a way that makes this simple task a bit tricky. Not only do you have to take the trajectory, speed and wind into consideration, but timing is very important as well sometimes. The physics are very good in this game and overall it plays very nice. The sounds are spot on, which is very important in my opinion. One thing I’ve noticed is the crowd in the background doesn’t yell like it does in the flash version, which is good because it was really annoying and made it hard to concentrate on the game. To be honest the game looks even better on android than it does on flash.

You learn how to play as the game progresses so pay attention to the tips that appear on the screen. Advice like “Some objects can be moved by balls” and “Wooden objects can be broken by balls” will not only make you giggle (it’s still funny) but also help you answer the question “What am I supposed to do here?”.

All in all it’s a simple game that can be fun even if you don’t like soccer. It looks, sounds, feels and plays great. The levels are cleverly designed and are tricky enough to get you addicted. It’s a whole lot of fun for the modest price of £0.99 = $1.542519. [by TurboNUKE]