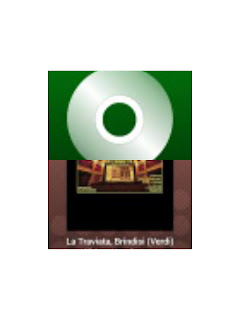 One of the weirdest players I’ve stumbled upon in Android Market. It has some good things, but overall it is unusable for any normal human being.

First of all, the interface is shabby, creepy and completely unintuitive. See for yourself, three main control buttons have to be pressed and hold to work, they have expanding windows, which are extremely unconvenient to use. Also the functions of these buttons are not very elaborated: playlist adder, category selector and alphabetic list (with an icon that look like ABC channel logo). You can customize their color though (red set for default).

Secondly, controls during playback are made with the same brain-twisted effort. You have album art, song and album names, large play/pause button, shuffle and repeat touch zones and finally duration counters. There are also a circle length indicator around main button and some thing with moving rectangulars. They are blinking and sliding like crazy with irritating speed rate. When you touch the album art, list of related tracks pop up (and can be closed only by selecting one of the entries or pressing the hard back button), and in case, where you have just random tracks, it seems useless. For example, in «doubleTwist» touching cover will bring up or hide a star rating.

Another unorthodox method is track switching: to select next or previous track you have to touch pause button and slide it right or left. Be prepared to discover some very strange music, because it scans all your SD card folder by default, including every music files like soundtracks form installed games and so on. For instance, I found all 272 sounds from uninstalled «Gangstar» game in playlist. What the fuck, man?

Good thing is that it is able to scrobble what you listen to last.fm, but you must have Scrobble Droid installed for this feature to work. Another one, the crossfader, might be useful for parties, where you would probably want your music to play smoothly without gaps between songs.

And a controversial thing is the widget, which could be used in various sizes from 4×1 to 4×4 (i.e fullscreen). Personally, I don’t need or like any of them, especially smallest one, but some people, who would admire this player in general, may find widgets amusing.

To sum this up, despite couple of good features, Lithium Music Player lacks any common sense when it comes to user interface, so I would not recommend it as your audio player. I mean, at all.

Just another instagram-inspired app for poor Android users, not being able to enjoy the original.

LittlePhoto has a nice wide selection of various presets to choose from, but (and there is always a BUT in android photo apps) it is poorly designed and works slowly on phones like HTC Desire. The idea of having presets on a giant vertical slidebar is extremely bad, because you always have to tap and hide it to preview an image, also if you’re lefty, it would be difficult to operate settings.

This app is an Android-exclusive, and I think I know why — it is unreal to compete with other monstrously popular instant photo apps on iOS, when yours is not even instant. Anyway, it deserves at least 3 out of 5 stars, because most android apps just make it look good.

A badge-earning checking-in app that allows you to expand your social experience to another level.

Ah, if Foursquare was not enough, now you can virtually «check-in» while watching movies, cartoons and tv shows. I can’t imagine why any sane person should do this otherwise than keep track of their progress with media consumption. Yet one strong reason is there for trophy/achievement geeks and maniacs — you can earn lots of crazy badges within this app, and by crazy I mean those awarded for watching some creepy lame shows precisely at specific hours.

App itself is a very good looking stylish piece of code, which can’t be said about it’s parent website full of bugs. Some users complain about recurrent «not connected» issue, but I guess this is not a common problem.

So, if you’re bored enough with tons of existing social media services and eager to participate in something new (well, not quite new since it’s clone of Foursquare), Miso is for you. For me, I’ve got to get some more platinums on the PS3 instead.

Minecraft Canary is a portable encyclopedia with all essential info related to popular Minecraft videogame.

For those who don’t familiar with it, Minecraft is a sandbox game focused on creativity and building, allowing players to build constructions out of textured cubes in a 3D world. The game is divided into two main modes — free Classic and paid Beta — where Classic is focused entirely on construction with unlimited material supply, while Beta requires players to acquire resources themselves, contains mobs, player health, and additional features and items. You can read full story at the wikipedia page.

The main reason to use this app is complete lack of any help or tutorial inside the game itself. And you need to know a lot of things to play successfully, especially when it comes to crafting recipes. Minecraft Canary contains all of the needed knowledge (or database) in one place with illustrations and detailed descriptions. It might need some design tweaks, font-wise for instance, but overall it is great already.

No comments for "Lithium Music Player Android Apps and Games"