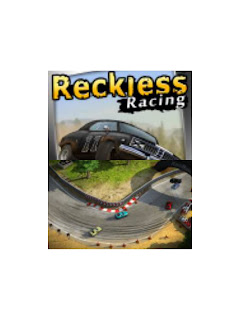 Reckless Racing [by polarbit] is one of the best racing games for Android I have ever seen. As soon as you see the high quality animated background of the menu, you know these guys mean business. This game has everything your heart desires and will bring out your inner redneck no matter how hard you fight it.

This game has both single player and multiplayer modes, so it’s twice as fun. In multiplayer you can host or join a local game, or find a game on the internet. You will need an account to play online. I know I don’t like registering either, but it’s pretty easy and quite worth it. Online gameplay is just as smooth as Single player mode gameplay.

There are 3 types of races in Single player mode; Dirty Rally, Hot Lap and Delivery. Dirty Rally is a standard race and it my favorite, Hot Lap is basically a time trial challenge and in Delivery mode you earn money by picking up goods at various places on the map and delivering them to their drop off points.

You can choose from 7 original tracks and 7 reverse tracks to race on. Each track is unique from type of road surface to time of day and weather conditions, so you it won’t get boring for a while. Besides that, there are also 3 medals to win on each track and you can compete for the best time on the track with other players thanks to the Online Leaderboards. Whether you are a SUV or muscle car type of person, you won’t be disappointed because there are 8 different cars to choose from. Each car has a colorful, stereotypical character to go with it. All cars have their strengths and weaknesses so it’s up to you to choose the perfect one for the job.

Even though the graphics aren’t that great, there are a lot of details in the way the cars interact with the game environment that makes up for it. There are lots of “hittable” objects, as well as dust flying from under your wheels as you drift around the track, the ability to fly off the track while getting some “air time”, the dynamics of the cars and more. Great music and sounds, good graphics, smooth gameplay off- and online, A LOT of playing options, a very easy to understand menu structure and lots of fun details throughout the game make Reckless Racing worth the $4.99 price tag. Don’t forget about the future updates that have to do with new cars and tracks you will get for free.

Terminal5 by [+1 Labs] is a puzzle game which is very similar to Shoko Rocket. Only instead of a mouse you play as a blue, big diamond eyed robot on skis. If you ever watched the show “Foster’s home for imaginary friends” on Cartoon Network, you will agree that this robot looks like a Japanese person’s drawing of a buff Blue. Believe it or not, a blue robot on skis going through mazes makes more sense than the original, but isn’t as popular. In this game you’ll have to guide the robot through various mazes of the dangerous Terminal 5 dungeon. You do this by programming the robot to follow the arrow commands you have selected. Maybe it’s the previous experience with Shoko Rocket, but I found this game to be a lot easier to understand and quicker to learn how to play it.

You can play it in portrait mode or in landscape mode and thanks to the fact that it’s a 3D game, it looks good either way. The drawing style is simple and the use of neutral colors makes it easy on the eyes allowing multiple hours of playing. The sounds are spot on and feel professional. But I would like to hear some music while I’m playing. Maybe the developers didn’t include a soundtrack because they thought everyone likes to play games while listening to their own music anyway.

The mazes are clever but a lot easier to solve than the levels in Shoko Rocket. The robot has to get to the Finish Field overcoming such obstacles as walls, closed doors, spikes and lasers. The term Conveyor Belt is used to describe the squares with yellow arrows on them. When you get on one of them, the robot is moved one field in the direction of the arrow. These an be your friend as well as your enemy.

There is a tutorial which explains how to play the game. You don’t really need to finish it, but you can because of the “extra” levels you get to play. There are 8 levels in the free version of Terminal5 and 20 more in the full game. The menu is simple, is nicely animated and has all the answers you might be looking for. If you’re not into playing hard games like Shoko Rocket or if you want to buy a game for your kid’s android phone, Terminal5 is perfect for that. The free version is available on the market and the full game will not set you back that much.