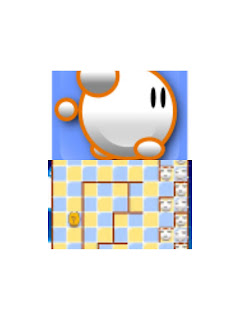 ShokoRocket [by Edward Woolhouse] is an android version of the apparently famous puzzle game for Sega Dreamcast called Chu Chu Rocket. This is the first time I hear about this Chu Chu Rocket because the first console I ever had was the almighty Playstation One. I don’t know why it’s called Chu Chu Rocket, but judging by the quick video I watched on YouTube about this game, it was created by Japanese developers, so it doesn’t have to make sense. (I actually went on Wikipedia to see if I was right about the whole Japanese thing and I am.)

Since ShokoRocket is based on a Japanese game it makes as much sense as the original. You have to help the mice get to their rockets (???) by placing arrows in front of them to help them run in the right direction and also to avoid hitting cats and holes. And honestly, I really like this game.

The graphics and sounds are very simple and therefore work really well together. If you played the original version you can start playing right away, but if you’re new to this game like me I suggest you take a couple of minutes to finish the training levels. The tutorial was pretty easy so I though I would have no problems finishing at least half of the levels before writing this review. After I was done with the first few levels I encountered a level that made me want to smash my phone. I can only image how hard are the last levels of the “Easy section”.

This game is all about levels; there are training levels, original levels, September levels, miscellanea levels and user contributed levels. So it will be a long time before this game gets old and thanks to the fact that you can create and share levels using the Editor option it probably never will. Remember that you can rotate the levels so that they fit your screen properly.

There isn’t really a menu in the game, but you can access it using the Menu Key on your phone. This will allow you to turn the sound on and off and help out with creating and submitting levels when you’re using the level editor. If you’re a fan of the puzzle genre or of the original game you should definitely check out ShokoRocket. It’s available for free and ad-free on the Android Market.

Super Slyder is one great puzzle game brought to Android platform with the help of OpenFeint; the game is also integrated with this service and you can compete with many players around the world on global leader-score board. The game is pretty fun puzzle game, you have to control your Slyder by tilting your device. Since I’m a big fan of puzzle games, I decided to review it once I heard the news of OpenFeint porting it to Android.

To solve puzzle, you need to navigate Slyder to the green portal, which is not always as easy as it sounds. Slyder only stops when he hits a wall, so you have to find a way. But the game is not that simple, there are plenty of help and plenty of danger for Slyder. You control in which direction will Slyder slide (as well as dummies, enemies and rollers) by tilting your device. While calibration occurs every level, and you have handy button to calibrate at any point of the stage, I still think there should be option to choose some other controls, swiping your finger would be easier I guess.

There are ceilings that hide something that is underneath them, keys that open certain walls, pits – and Slyder doesn’t like pits! Gun that will slow him down, dummies that will help him, and move around in the same direction as he, and dangerous enemies. There are vertical and horizontal rollers, there are death rollers. Don’t let screenshots in this review fool you – levels are very complex and sophisticated, those are just from the tutorial that gets you familiar with all the available objects. Some levels you will have more than one Slyder to send home.

If all of the above sounds confusing – it’s pretty simple once you complete in-game tutorial that was composed in such a manner that makes you familiar with every aspect of the game and make you fluent in solving puzzle.

No comments for "ShokoRocket Android Games"