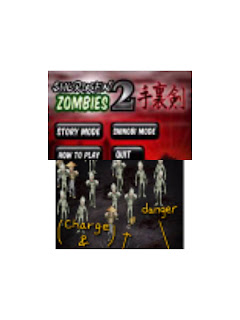 Shuriken Zombies 2 [by kaku] is a sequel to the original Shuriken Zombies game. I don’t know about you, but I love zombie movies and games, the same goes for ninjas. When I saw my 2 favorite things in the title of one game, I got very excited and since it’s the next day after Halloween, the timing was perfect as well.

How to Play Shuriken Zombies 2

You play as a ninja which is always cool and your mission is to kill zombies, which is even cooler. Obviously you do this by throwing at them the coolest throwing weapon ever – shurikens. Sounds simple, right? Well…it is, but it’s far from being easy. You don’t just use your index finger in this game; you give it a freaking ancient Japanese ninja finger workout. If you ever beat this game, which is nearly impossible, you’ll be able to poke your way through a wall. After this, Fruit Ninja seems like something a slow (as in “special”) kindergarten kid who’s been given a handful of Ritalin would play.

Shurikens are your main and only weapon that is able to kill one zombie at a time, but there are a few power ups in the game that help to deal with the overwhelming amount of zombies. One thing you can do is tap and hold your finger on the screen, this will charge your shuriken, making it bigger and giving it the power to cut through a crowd of zombies. This comes in handy for getting to the other power ups. Every once in a while a blue zombie carrying a box will walk from one end of the screen to the other, accompanied by a distinct roar. If you manage to kill the zombie, the box breaks and you get a power up or two in the form of a box with a picture of the power up on it. You can get one of 3 things: a bomb that doesn’t really explode, but just throws the undead bastards surrounding it off the screen, a limited amount of pre-charged Shurikens that work exactly like the original charged shuriken or the ability to throw 3 shurikens at a time for a short period of time. You have to break the power up box to use it and I suggest you do this whenever possible, because power ups are the key to completing any level.

There are two game modes to choose from; the standard Story mode and Shinobi mode. The story mode is pretty much self-explanatory; there is a short story in the beginning of each level. Shinobi is probably Japanese for “insane survival mode” where there is no story time you can use to catch your breath before the next level begins. Every level requires you to perform a special task which can be anything from killing a zombie boss to killing a hundred zombie rats and saving your family. The graphics are pretty basic and look like something you’d see in a flash game as are the sounds and music.  The gameplay is very simple and the overall style of the game is pretty basic as well. However, it’s one of the most creative games I’ve seen and you can tell that the developers put in a lot of effort and did the best they could with what they had. The idea behind the game is genius if you think about it; the coolest good guys (ninjas) fight the coolest enemies (zombies). Some of the bosses and other special enemies look very original. This shows that developers of this game have the creativity and ambition to make a good game, so with some financial help and a good development/ designer team they can turn this game into something that looks as good as Fruit Ninja, but is even more interesting to play.

Shuriken Zombies 2 is definitely worth checking out if you can get past the looks. It can even become addictive thanks to the online ranking system and shouldn’t get old for a while since it has 100 levels for you to beat. The full ad-free version costs about $1.85.