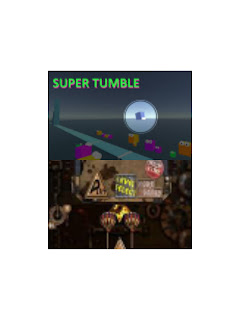 Super Tumble [by Camel Games] is another physics game from these guys. I’m starting to like these developers because Super Tumble turned out great. It has cleverly stacked Tetris-like blocks that explode when touched. So you’re both entertained and using your brain at the same time. It’s fun to play, but be careful because it gets addictive.

The aim of this game is to explode the blocks in a way that will make the star fall on the platform. The star is balanced by a rotating gear in the center, so it’s not very easy to knock over. You can destroy only one block at a time. Pick your blocks carefully, if you choose wrong the construction will collapse and the star will fall off the edge.

The game is drawn in an old western, mechanical, junkyard style which looks awesome. Reminds me of the movie Wild Wild West. Some sounds will confirm this description. The gameplay is smooth thanks to the simple graphics that actually look pretty good. Too bad there is no soundtrack, I guess I’ll have to download some country songs for my phone.

There are 12 levels in the demo version and each level has something new to offer. You have your wooden blocks, glass blocks, exploding blocks and even blocks tied to balloons, so the game doesn’t get repetitive. If you get really good at this game, which shouldn’t take too long, you can compete with other players thanks to the online high score table.

Super Tumble is one of the games I will keep playing even after the review is published. At only $1.99 I will definitely be checking out the full version with 90 levels. Some quotes from comments left by people who got the full version:

“I enjoy this more than Angry Birds…”

“Works great on my phone…”

The Forex Game [by Jerome Fillion] is a basic tutorial on foreign exchange trading. The game is designed to give a preview of currency trading without actually creating an account with one of the forex brokers. This is not an addictive and very fun game, but in case you consider trying trading currencies, it can be an efficient first step.

The game imitates the random historical movement of the currencies and it actually tests your decision making process with the past data. Thus, it allows you to actually see if you already have a forex mindset.

After downloading a game your account has to be set up. You need to set such values as:

Stop Loss in pips – a moment when your order is being stopped because of the loss you incurred. This is done to eliminate investors’ risk to a certain amount.

Take Profit in pips – generally it is same as the previous point, but it is a moment when your order is being stopped because of the acquired profit.

Starting Capital – an amount of virtual moment that you receive.

Risk taking in % – this cannot be easily determined. To us it seems that this indicates the size of your trading positions.

Spread in pips – a difference between bid (buy) and ask (sell) prices. This value illustrates the amount of funds you lose instantly once you open a trade.

After having your account set up, the trading begins. Please keep in mind that all of the chart data is actually taken from real historical trends.

In order to see the chart, a screen has to be tapped. After taping a bar will appear, in forex trading this bar is called a candlestick. Generally, candlestick illustrates a price movement within a certain time frame, if it is green, then the price went up, conversely, red candle sticks indicates a price decrease.

As a result, the game is about selling and buying currencies, covering your positions and basing your decision making on candlestick pattern analysis and economic calendar news.